Dietary shifts must be part of 'game-changing' food systems solutions

Last week, at the pre-summit of the United Nations Food Systems Summit (UNFSS) in Rome, 500 in-person and 20,000 virtual delegates gathered to outline a pathway toward healthier, more sustainable and equitable food systems. It was an impressive lineup of speakers, ideas and initiatives that demonstrated the power the summit has in uniting global decision-makers around a shared food systems agenda.?

To provide some insights for those who weren’t able to tune in, I was planning to write up a summary of the most important happenings. But after debriefing with some delegates, it turns out that there’s a more interesting story to tell.?

Before diving into the details, let’s go over some basics. The UNFSS is the U.N.’s first high-level endeavor to raise awareness of the inter-linkages between the health, environmental, economic and social justice-related outcomes of food and agriculture sectors. The actual summit will take place in September in New York and bring together the world’s presidents and other decision-makers to act on food. In preparation, the pre-summit took place in Rome, tying together the work many groups have done over the past year. The cake has been baked in Rome and will be iced in New York, so to speak.?

The story of what didn’t happen in Rome

World leaders didn’t make healthy and sustainable diets a priority. Seven action coalitions were launched, but none includes work on reducing meat and dairy consumption in high-income countries and supporting communities around the world in shifting toward nourishing diets.?

What does this really mean? Meals should be dominated by healthy and climate-friendly foods such as fruits, vegetables, legumes, whole grains, nuts and seeds that are prepared in culturally appropriate ways. Sustainably produced animal proteins can be valuable components of diets as well, but the factory-farm-powered overconsumption of meat we are seeing today in many countries should be scratched from our plates. Accelerating these two shifts would be essential to mitigating the global climate, biodiversity and public health crises. By focusing one of its five "Action Tracks" on sustainable consumption patterns, summit organizers have recognized the importance of this topic.?

However, instead of agreeing on a "game-changing solution" for diets as part of an overall food systems transformation, as the summit organizers asked them to, world leaders let politics get in the way of progress. Let me explain why this means that despite the headway that has been made on other important topics such as school meals, food waste and sustainable agriculture, UNFSS could fail to achieve what it set out to do.?

The unique premise of a food systems summit?

Food and agriculture aren’t new topics for the U.N. and its member states. The Food and Agriculture Organization (FAO) began working to address hunger and food security in 1945. Three years later, the World Health Organization joined it in its mission. As the world’s largest humanitarian organization, the World Food Program has been providing assistance to the world’s poor for 50 years. The U.N. Environment Programme (UNEP), established in 1972, has been working to improve the environmental outcomes of food production. The list of relevant agencies and organizations goes on.?

But the UNFSS is the U.N.’s first ambitious attempt at bringing systemic thinking to food issues, which is essential for making progress. Working in isolation, agriculture policies can undermine those of public health ministries. Economic incentives — subsidies to industrial meat and dairy production, for example — can contradict efforts to cut greenhouse gas emissions. The UNFSS is supposed to highlight such dependencies and incentivize governments and businesses to commit to activities that enable people and the planet to thrive.?

World leaders fail to act on healthy and sustainable diets?

The UNFSS uses two approaches to activate such commitments. Calling itself a "people’s summit," the bulk of its efforts focused on public engagement. During the engagement phase, thousands of experts and citizens came together to crowdsource challenges, priorities and solutions. Leadership groups then worked to distill these solutions into thematic clusters.?

Food consumption was an essential theme throughout this process. A consultation of about 10,000 young people, for example, identified access to healthy and sustainable food as their top priority. Lana Weidgenant, deputy partnerships director for the climate justice organization Zero Hour and the summit’s youth vice-chair of shifting to sustainable consumption, told me: "Young people make up half the world’s population, and our futures are negotiated here. We will have failed by the end of the summit if there’s no action on healthy and sustainable diets."

But that’s exactly where the summit is headed. During the action phase, UNFSS leaders presented solutions to governments and businesses that could implement them. The pre-summit launched seven coalitions, which will be the most tangible output of the process. Through them, U.N. member states will collaboratively work toward food systems policies and programs. In this last step, countries decided to omit healthy and sustainable diets from the work going forward, even though this solution is strongly supported by civil society organizations and academia.?

It also means that despite a year of focused education and engagement, world leaders still don’t understand what the 'food systems' concept really implies.

This mostly speaks to the political tension still surrounding key issues such as the consumption of meat and ultra-processed foods. But it also means that despite a year of focused education and engagement, world leaders still don’t understand what the "food systems" concept really implies. "Food systems go beyond food security and the mechanisms we have to address hunger," Weidgenant said. "It’s about making the connection to human and planetary health, and addressing urgent climate concerns."?

Neglecting healthy consumption means that countries still think of food mostly as calories instead of nutrients. But when done right, food can be medicine rather than causing public health crises. Neglecting sustainable consumption means that countries aren’t ready to acknowledge that what gets eaten matters, not only how it is produced. Shifting consumption away from factory-farmed meat and to foods that require fewer resources per nutrient such as fruits, vegetables and legumes?is a pre-condition for enabling sustainable agricultural practices that often have lower yields but can be more environmentally friendly and just.? 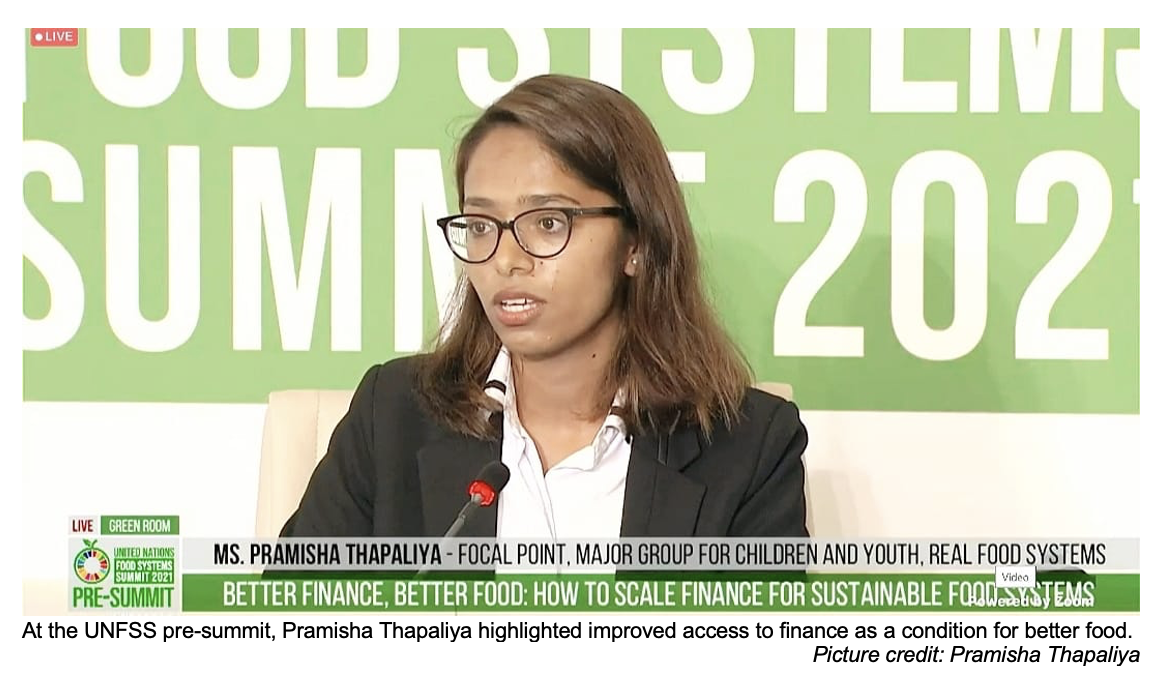 Awareness and engagement around shifting to healthy and sustainable diets existed long before the UNFSS. While not including the issue as a member state coalition is a missed opportunity for accelerated progress, it certainly won’t put an end to the movement — especially not if young people get their way.?

Pramisha Thapaliya, youth ambassador for the advocacy group Real Food Systems and a UNFSS youth delegate, told me that young people also used every opportunity during the pre-summit to advocate for the establishment of a formal and institutionalized youth platform in food systems. Thapaliya says it could facilitate more effective collaboration of young leaders and youth organizations in the food systems space, leverage grassroots organizing for on-the-ground implementation and allow young people to influence policy processes.?

"This summit was just the starting point for us, creating momentum for what’s next," Thapaliya told me. The U.N.’s upcoming conferences on climate (COP26), biodiversity (CBD COP 15) and the World Food Forum are among upcoming gatherings in which she plans to advocate for better food systems.?

How school food can serve a climate solution

The right way to spend patient capital for food reform

See all by Theresa Lieb